Pianist Jeremy Denk recently released his first memoir, “Every Good Boy Does Fine: A Love Story, in Music Lessons.” Ahead of his performance of J.S. Bach’s Well-Tempered Clavier at GBH Calderwood Studio on April 2 and 3, part of the Celebrity Series of Boston, I caught up with the MacArthur “Genius” Fellow to discuss themes from his book, the musical pieces we take for granted and the challenges of writing about music.

James Bennett II: Why do you feel compelled to tell your personal history through the medium of music? Apart from the fact that that is your profession and that's what you know, what advantages does that give you as a storyteller?

Jeremy Denk: It's mostly the story of music lessons and all the amazing and difficult teachers that I had. And then I would say, secondarily, it's a story of me trying to survive as a person and trying to become a person. And I thought it was actually good for comic relief — to see how incompetent I was at dealing with life while I was growing up — and also to frame the music. Because I feel it's important that we connect classical music to everyday life, to the sublime and the ridiculous.

Bennett: You begin the book with a personal history of your family. Can you get into how that shaped who you became, as a musically inclined person?

Denk: My father was a monk for 10 years — I was born a year after he left the monastery. His life story is complicated because he kept pursuing one thing or another and finding them unsatisfying. First it was science, and then it was religion. He ended up doing a lot of acting, also. He kept looking for something. And it seemed like that was really pertinent to the way that I thought about being a person who is growing up.

My mother loved music profoundly, you know, and listening to music was an important part of her. But both of them, of course, were terrified of the idea of me becoming a musician. And that was another huge theme for me growing up: trying to overcome doubt and their doubts, which manifested in my mind as they would.

Bennett: One thing that you have in the text itself are these literal musical sketches, the images of the sheet music. Early on, there are two bits from your youth: “Ode to an Irish Grandmother” and “Rondo of an Exhausting Day.” Did you just have those scans lying around? And how much is your early work a part of you now?

Denk: I still have my teacher's notebook from way back when, and I have, you know, a lot of documents of my high school and college papers I wrote. They're pretty hilarious in the sense of ridiculous overambition. Sweeping themes trying to address the great issues of life, and I was like 14 years old. I guess we held on to a lot of that and I tried to use it in the book to give a sense of what kind of person I was. And “Ode to an Irish Grandmother” was stolen from the theme from Star Wars, which I didn't realize until many years later.

Bennett: Is it interesting to track your creative growth because you have access to all of these documents, musical and extra-musical? Or is it like, “That's kind of who I was, I'm not really there anymore?" Is there value in revisiting your teenage and early-20s brain?

Denk: I think the value is to see the process of gradual revelation, to trace the big moments when I really crossed over some hurdle or another. We see the sometimes accidental ways that we learn — the ways that we fail to learn for a long time, then suddenly something strikes us. The stratagems that teachers have to use to connect us with really important things. I guess for me, that was the value. It’s this beauty of the process of learning, which I would connect to the beauty of the way, sometimes, musical pieces unfold.

Bennett: You’ve structured your book into three parts: Harmony, Melody and Rhythm. I’d argue that for the overwhelming majority of people, when they hear a new piece of music, the thing they’ll think about is the melody. Harmony, I guess, has implications of being a bit dense or complex or nerdy. And yet you start with that. Why that decision to first establish the “harmony” of lessons and musical examples and episodes from your earlier life, and not the other way around?

Denk: As a pianist, we play so many notes, right? We're very attached to harmony. I made a little joke about that to a violist friend where I compared harmony and sex, and he's like, “That's such a pianist thing to say.” And it's true. Pianists really get off on big vats of harmony, and we love to feel the interaction between all the various voices, these incredible vertical things going on.

I guess my decision to order that way was partly because I thought the “harmony” chapters set a good tone at the beginning for talking about the very existence of a pianist. And partly because maybe my first love in so-called classical music was harmony.

Bennett: You have these musical lessons placed throughout the book, including one for the Well-Tempered Clavier, specifically the Prelude in C Major from Book I. Walk me through what is so magnificent, so lasting — or, as you write, so stubborn — about that piece.

Denk: Bach, from the very beginning of that piece, teaches us about what is possible in harmony, in a system of harmony that had only kind of recently congealed into a new form. I talk a lot about these seventh chords that have gradations of yearning in them. Throughout, he’s showing us the power and desire held within these chords, and the ability of music to create these incredible senses of tension and release. The distance from the Well-Tempered Clavier to the Hanon exercises is vast, even though they test the fingers as profoundly as any Hanon exercise would. Not to mention that Beethoven, Haydn, Mozart all studied these pieces when they were kids and then again later in life. So they had such a profound historical impact after that and in the whole unfolding of what we call classical music.

Bennett: In the same section you recall watching “Before Sunset” after a “romantic misadventure” and being riveted by a Nina Simone recording used in the film. How does that work into all this?

Denk: I didn't really discover Nina Simone until I was into my 30s, which is embarrassing to say. I certainly knew of her incredible work before I saw the movie. It's an amazing moment, it sets loose all these emotions that have been hovering in the background. Nina Simone's performance has a sort of simplicity of the opening and then the incredible harmonic tension once she starts singing again.

In many ways she uses many of the same techniques that Bach uses, in the first preludes of the Well-Tempered Clavier. But she bends these classical harmony ideals to her own style and her own expressive intent. And I think that's such a model for what performers try to do in general. I've spent enough time with Nina Simone, and I've admired her artistry so much that I don't feel she's an odd person put [in discussing classical music] in any way. I've often said she's one of the greatest pianists of the 20th century. What I think she does is not in any way separate from great stuff that Beethoven does.

Bennett: You talk about how there are some pieces that are so fixed in our pop-culture minds that we take their goodness for granted. Are there any pieces equally ingrained in American culture that are esoteric — something scary and complex that has somehow overcome a barrier of misunderstanding and is with us right now?

Denk: That's a tough one. There is The Rite of Spring — that's a piece that Disney managed to sort of connect right to the wider world in a great moment of cultural ambassadorship. It's not so easy.

Bennett: Yeah, you wrote that you had bought a copy of the recording with a $20 gift card that you had gotten as a birthday gift.

Denk: Oh, of course. I discovered The Rite of Spring at summer music camp. It wasn't a real triumph for me, I didn't really practice — I listened to a lot of music and talked with a lot of kids about music that was very exciting for me. I didn't really have a social life. I didn't win anything or do anything especially noteworthy. And I came home and my parents were sort of wondering, “What was the point of going off to music camp?” And I was like, “Well, you know, I encountered this piece…” I had this gift certificate left from some birthday presents and I went out to buy The Rite of Spring to show them what I had learned over the summer, and the magic of the 20th-century and modern classical music. It didn't go over very well, unfortunately.

Bennett: What was their reaction?

Denk: My dad was like, “Turn that crap off, you're going to blow up the stereo.” So I had to give up on educating them about Stravinsky, at least for a while.

Bennett: Well, Disney got the cultural ambassadorship down pat.

Denk: Well, they did a cartoon. If there'd been a cartoon ballet or something, maybe that would have helped, you know?

Jeremy Denk performed Bach's Well-Tempered Clavier, Book I in a concert presented by Celebrity Series at GBH's Calderwood Studio on April 2 and 3. 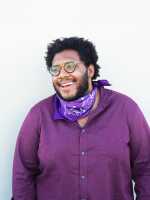